In the deepest canyon of North America- Hells Canyon Idaho, there are tales of history as deep as the canyon. The history along the banks of the Snake River is rich and very alive today. Whether it’s an old homestead, a hay field, an irrigation tunnel or pictographs left from Native American Tribes, there are remnants of days gone by. Around every bend in the river, there’s another facet of history to explore. Hells Canyon Idaho is fascinating for any history buff and the best way to see it all, is in a raft with America’s Rafting Company. 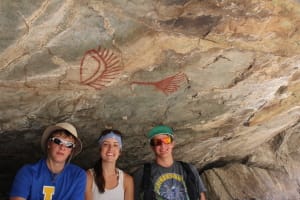 Some of the most intriguing history, is that of the Native American Tribes that once inhabited the river canyons and traveled on the high ridges. Their mark can still be seen today. Viewing some of the pictographs in the canyon leaves you pondering the meaning of the image, the meaning of life and the reason for our existence. Hells Canyon Idaho is a breathtaking and awe-inspiring back drop to do some real contemplation and self reflection. 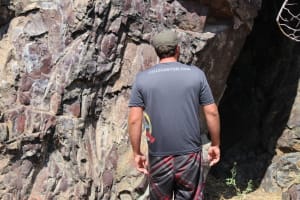 There are canyon walls along the Snake River that still show signs of a long ago camp fire, where Native American’s spent many nights in the shelter of the canyon’s walls. They would have used long sticks and branches laid against a rock face at an angle to create a shelter, while spending their days along the river banks foraging and fishing. Another home that we commonly see in Hells Canyon Idaho is called a “pit house”, it is merely a depression in the earth now, but when in use would have been much deeper and likely had a roof of branches and sticks. This type of dwelling is built where there are no rock faces to access. There are spots along the river canyon that are much more conspicuous and take some real thought and expertise to understand the importance to the Native American people. For instance, a confluence with a creek and the river where there is a bench on top would have been a cross roads to mingle and prepare for the upcoming journey, whether they were headed into the canyon to fish the fall Salmon run or up on top of the palouse to dig and store Camas root. There is a place similar to this, right along the Salmon River that is currently studied every summer. The University of Oregon has come back each year for the past 11 or so years and uncovers a mighty pit that they have dug. So far they have found artifacts that date back 11,000 years ago. They commonly find shards of basalt which are chips of rock from building arrow heads. There aren’t many arrowheads to be found, they are usually found in hunting grounds. This leads researchers to believe that the area was used as a camp site to build and repair supplies before heading into or out of the river canyon.

The different tribes of Native American’s that frequented Hells Canyon Idaho were Shoshone-Bannock, Northern Paiute, and Cayuse Indians. But, the earliest tribes in the canyon were the Nez Pearce Indians. The canyon was ideal for so many reasons for inhabitaion, but perhaps the most relevant includes the mild winters and early/abundant plant and animal life. Hells Canyon Idaho is so deep that it stays comfortable even in the Winter. Spring arrives earlier in the canyon than up in the high country and the Fall temperatures stay nice and comfortable much later in the year. In fact, I have been rafting in Hells Canyon Idaho in January, it was cool, but not cold! There were green grasses growing and the buds of wild flowers were starting to show. We saw wildlife of every array, as the high country gets snowed in, the wildlife are pushed down to the river to find food, shelter and water. I can only imagine what the canyon would have looked like when the Nez Pearce Indians were there and called the walls of the deepest canyon in North America home.