In honor of our first blog post, I would like to take this opportunity to introduce the team at America’s Rafting Company. We are an Idaho Rafting Company based in Central Idaho. We are very excited to be entering into this platform for reaching our readers. We have a lot of plans and visions for this blog and hope that with each post it gets better and better. The ability to research and become educated on various topics is limitless in this day and age of computers and the web, we plan to present ideas, tips and tricks, reviews and share our trips with you here. We would like to be a trusted source for all the various adventurers that the northwest has to offer. Whether you’re wanting an honest review of a new life jacket, or to get a sense of what a trip down the Salmon River will be like, this will be a great place to see some pictures, read some fun stories and get a feel for who we are and what we represent.

Enough about the blog, here’s a little about us. I will start with myself since I am writing the blog. My name is Becky, I grew up in Winnemucca, NV. I was involved in all kinds of activities from 4-H to basque dancing. After graduating I went to the University of Nevada, Reno and then California State Chico. It was in Chico that I was first introduced to Whitewater Rafting. I went on some trips with friends, and thought “hey, this rafting stuff is sure a lot of fun!” So after I graduated I moved back home to Winnemucca and found Parker (more on that later).

Parker Arrien also grew up in Winnemucca, NV. He went to the same high school as I, but led a different path after graduation. Unlike Becky, Parker was introduced to Rafting at a very young age, his family has been enjoying Idaho Whitewater Rafting since 1985. Parker attended Idaho State University in Pocatello and was a river guide during the summers. When Parker was done with school at ISU, he moved back to Winnemucca and found me.

Once Parker and I found each other it was just a matter of time before they started making plans for their future, and moving to Idaho was never left out of the conversation. So, one day we decided to make the big move North. We have set up our home base and warehouse in Meadows Valley (which in our opinion is the most beautiful spot in the world) see for yourself… 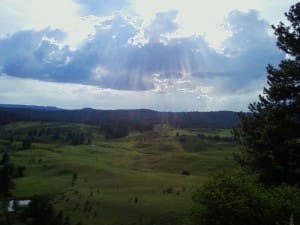 So, there you have it, Parker and Becky are excited about this new chapter and look forward to sharing it with you through this great thing we call the internet.