We live in New Meadows, ID. There are mountains, streams, rivers and valleys that seem to go on for eternity. There is one little stream that has had our attention for years, folks ’round here call it the Little Salmon River, it’s an eye-catching little river that runs along Hwy 95. The larger Salmon River flows unencumbered throughout Idaho, in fact it is the longest free flowing river in North America, meaning that there are no dams or other man-made features that hinder or alter the river’s natural course. But, enough about the Salmon River, that is another post all in it’s own right. Let’s get back to the Little Salmon, which we have been eyeing for quite some time, we’ve heard stories told that many people have floated it, but we had never had the pleasure of launching our boat on the water that flows right through our little piece of heaven of earth- Meadows Valley.

We have tried a couple of times, without success to organize a float, but hadn’t actually made it happen until recently. In fact, we (along with many close river guide friends) spent Easter Sunday afternoon scouting the river to see what it had to offer in terms of Idaho whitewater rafting. 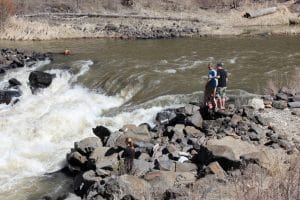 The river is fed by snow melt off, it rages in the spring and very early summer and then slows down to a small stream in late summer and early fall, so our window of opportunity to find the perfect flow was small. For all of the rivers that we float, we keep an eye on their flow, we had been watching this flow all spring and when we scouted it on Easter Sunday, it was at 1700 cfs (cubic feet per second) that flow was definitely do-able, but with a little more water it would have been just right for us to take a raft down.

On a Tuesday morning in early June, Parker and I were working in the office, getting some mailers out to past/present/future guests, and we got a call from a friend of ours, they were in town, had their boats loaded and were headed to our warehouse. That was the call we had been waiting to make and here it was, knocking at our door, the time had come to float the Little Salmon River, the flow was just right, the air was warm and we had plenty of well trained, professional river guides to share the river with. What a great way to spend a Tuesday! Parker and I hurriedly got our boats loaded, grabbed our dry suits, life jackets, throw ropes and our faithful river dog, Scout and headed down the road.

A short drive later (15 minutes from our back door) we were at the river and rigging boats. In our group, we had two different types or water craft: two rafts and two inflatable kayaks, there were 7 of us and 3 dogs. We were set. 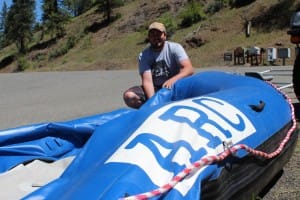 One of the crew had floated the river a few weeks earlier and for the rest of us, it was our maiden voyage. We decided to set out with one raft in the lead, the two kayaks in between and our raft pulling up the rear.

We all stayed close together and kept a watchful eye on each other. We knew that this was a small river, packed with some of the best Idaho whitewater rafting! It is a narrow river, with a lot of rocks, rapids and no time for regrets. Once we launched, we quickly realized that this was not a leisurely float, this was an all-in-intense ride. We kept our eyes down river and each man on the oars had to make quick decisions. This river drops at 75 feet per minute, meaning that the water moves quick, much quicker than the larger rivers we spend most of our time on. The Snake and the Salmon rivers are both classified as large pool and drop rivers, where you’ll charge through a rapid, and then have a large pool to slowly meander through. The Little Salmon River was all rapids, no rest. We were able to pull over a couple times to catch our breath and dry out a bit, but once we got back on the water we were drenched from head to toe, hearts pounding making sure that each stroke of the oars counted.

I don’t mean to make it sound scary, but this was an extreme little stretch of river that should only be approached by very experienced boaters and luckily for us, a large part of our group of friends are all river guides and have been for years, so we floated along without any mishaps and had a great time. At some point during the day, we each said, “I don’t know why it’s taken me so long to float this” and my favorite quote from the day was “gosh, this little river is packed with adventure!” So, the next time you are driving north on Highway 95, through New Meadows and on into Riggins, look to the side and you’ll see the Little Salmon River, that is the stretch that we floated and can’t wait to so it again next Spring.