Earlier this summer, we had family in town visiting. We had planned all sorts of activities for the weekend, but had a day that we were still undecided about what to to do. So, as Sunday rolled around, we all talked about a couple of ideas for the day, but ended up settling on- you’ll never guess it- a Salmon River Whitewater Rafting trip! Who’da thought right? Since we only had one day to spend, and it was a small family trip, it didn’t take long to get ready . We grabbed sandwiches, a cooler and tossed a boat on the trailer. It wasn’t long before we were standing alongside the Salmon River launching a 14′ paddle boat. 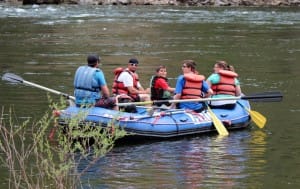 The souls on board included my Sister and Brother-In-Law and their two boys. I was the shuttle driver and was lucky enough to have a co-pilot: my 7 month old nephew! As the boat left the water, baby and I headed down the road for our first stop to have some sweet potatoes riverside (not me of course, I had a sandwich) and wave as the raft went by. Only, we must have gotten busy eating sweet potatoes and giggling, because we didn’t see the raft pass by. The Salmon River was flowing at a pretty good speed, it was late June and probably hitting the 13,000 cfs mark. I misjudged how quickly they were traveling. I loaded baby up and headed down the road to wait at the bridge to get some photos of the whitewater there. But, I never saw them. I was puzzled. Were they really going that fast, or was I just really slow?

Soon enough it was apparent that I was just really slow! I had missed the upper section of their rafting trip by a long shot, so I headed into Riggins and met the raft at the city park. We laughed for awhile and then made a plan for me to get at least a couple photos. I headed down to time zone bridge, hopped out of the car, had baby in a carrier, Canon Rebel TDI in hand and found a great view of timezone rapid. There, I was finally able to get some great photos and boy was I glad I did. Here are some of my favorites from the day: 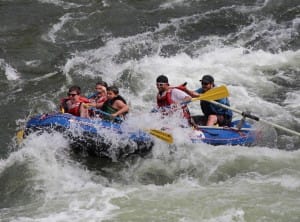 We had a great day, in fact, I can’t think of a better way to pass the time with friends and family then a Salmon River Whitewater Rafting trip!