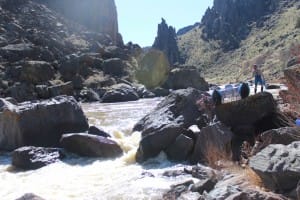 Here at America’s Rafting Company, we take people rafting for a living, but also love to go on our own rafting trips.

Usually we are able to take Spring and Fall rafting trips and squeeze in one or two Summer trips. In the Spring time, we especially love to take Owyhee River Rafting trips.

The water on an Owyhee River Rafting trip can be a bit of a challenge, it is an early Spring run-off river, meaning that as soon as the snow melts, the rafting is on and you’d better hurry, or you’ll miss it. At least, that’s been the case in recent years with lower than normal snow fall. So, this trip was planned to be a lower water trip, the guys were prepared for lining boats and at worst, maybe having to portage some rapids. They ended up portaging more than anticipated, meaning they un-packed everything on the boats by hand, walked it down river below the rapid, then either had to disassemble the boat itself, or push, pull and pack it over the rocks, trails and whatever else may be in the way. 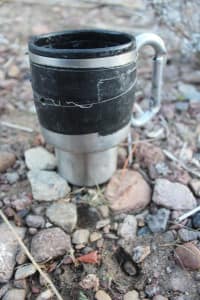 Typically, an Owyhee River Rafting trip does not turn out that way. In fact, when the guys headed out on the trip the river was flowing at well over 1500 cfs, the morning they launched it dropped down to 1300 cfs and by the time they got off the water, the river was flowing at 700 cfs. That’s a serious loss of water, it happened much more quickly than the guys thought it would. Looking back, I think they may have held off on their Owyhee River Rafting trip. But, of course anytime spent on the river is not wasted time. The guys were very likely the first humans to be in the river canyon this year and they caught sight of some amazing artifacts.

In Oregon, it is illegal to take or unearth any sort of Indian artifact. With the rain and snow over the winter and no one walking around the camps, the guys were able to spy some arrowheads sitting right on the surface of the sand, a pretty cool sight that not many get to see. They also found some sheds along the river bank. It is legal to take them, or at least rearrange for a great photo, like they did here:

All in all, it was a great Owyhee River Rafting trip- one for the record books!