Whitewater Rafting in Idaho: Visiting the Clearwater, Lochsa and the Selway

Last week, I posted about our visit to the Clearwater, Lochsa and Selway, so in this week’s post, I just wanted to finish that up and talk about a couple more things. Whitewater rafting in Idaho is definitely a must for us (especially since we do it everyday) but, we truly love every aspect of it and especially love exploring new rivers. Seeing those three rivers and getting to know more about them, has definitely gotten our wheels spinning. We are so excited to get back up there and spend some time whitewater rafting in Idaho!

While we were on our road trip, visiting some great areas of whitewater rafting in Idaho, we stopped by the hatchery. It was a great time of year to be there, they had just released some chinook salmon into the creek near the hatchery and had some more fish in the tanks that they would release this fall. It was great to see where they came from, how many fish they were releasing and what a great quality facility they have! In the picture of the tank below, the little black spots are salmon, the tanks were huge and there were about 40 of them all filled up like that one with little salmon! 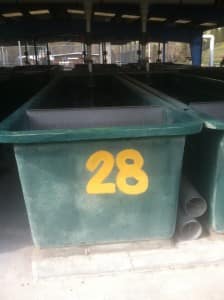 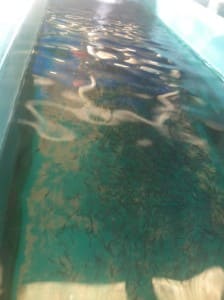 The other thing we learned, while we were checking out other areas for whitewater rafting in Idaho, was about the great trail system along the Selway! The Selway River is one of the most pristine in the country! In terms of rafting, the USFS only allows 1 permit to launch per day, compare that to the 4 permits per day on the Snake River and 7 permits per day on the Middle Fork! The chances of a river trip coming across another river trip are very slim! The chances of drawing a permit to float the Selway are even more slim. But, backpacking along the well developed trail doesn’t take a permit, so it’s a great way to see the river, although some may consider it a lot less exciting. Here’s a photo of the trail system along the Selway River:

Whitewater rafting in Idaho is never a bad choice, no matter which area you choose! Come see America’s Rafting Company to get into the back country and visit Idaho’s premier river canyons!