This post is more than just a weekend review, it’s a 3 week vacation review. 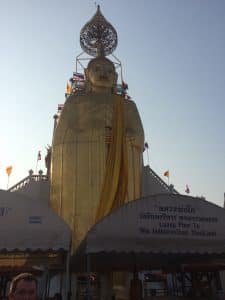 It may be a challenge to get it all in one post, so here goes… Parker and I have gone on vacation together, but it’s always been pretty local- the Oregon Coast is our favorite spot, in fact the ocean in general is our favorite. Being born and raised inland, the ocean forever will be awe-inspiring to me and a little terrifying- it’s so darn big! Anyways, we had been talking about traveling for quite some time and were lucky enough to take a lot of people rafting last summer that had travelled the world so we always asked where their favorite place had been. After a lot of consideration, we knew a couple things: we wanted to go somewhere totally different from Idaho, we wanted somewhere warm (we would be traveling in Febrauary) we wanted good food and to go somewhere that our dollar was strong. That led us to Thailand! We would be able to dive, snorkel, swim, lounge, eat good food and do it on the cheap!
Parker got me plane tickets for my birthday last year, so it was just a matter of selecting the location and the dates and we did that early winter and started marking the days off on the calendars. Working for yourself has it’s ups and downs, we dodn’t have to ask for the time off, but worried about being gone for 3 weeks away from the office. We chose to go in the slowest month for America’s Rafting Company and the month that cabin fever seems to have it’s largest hold: February. We set off to Boise on February 10th, met Parker’s mom, aka, Scout’s guardian, in Boise for dinner and handed him off. He was headed to Nevada to run and play at his “grandparents” and we were headed off across the international date line to a land unknown. Our dear friends and fellow rafting guides dropped us off at the airport early on the 11th and we 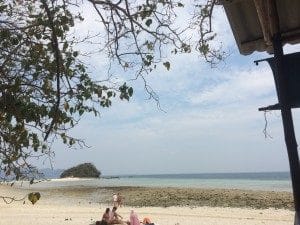 loaded up in the big plane. 2 hours later we were in San Francisco, 10 hours later we were in Tokyo and another 7 hours later we were in Bangkok. We were exhausted and ready for sleep and a shower when we arrived and after a tussle with a taxi driver and finding a room for the night we could barely contain our excitement. When morning came (not many hours later) we set off on foot outside our hotel, hoping for inspiration and some food. We found a coffee and a street vendor with some meat and rice, then decided it was time to pack our packs and head into the heart of Bangkok. We got another taxi to the nearest train station, crossed our fingers and hopped onto the sky train. Soon enough, we were at Hua Lampoong, the central Bangkok train station where we would board a train and head south to the islands. We elected to ride the night train, as it would take about 12 hours and we wouldn’t need a hotel for that night. We were able to reserve a sleeping car for about $8, we had bunk beds, a sink, table and electricity, what more could we need? That was one of my favorite modes of transportation, and believe me, by the end of the trip we had taken all of them. When we arrived at our destination- near the islands, but not quite, we boarded a bus which we suspected would take 2 hours to get to Krabi, it ended up taking 7 with a lot of stops and worried travelers in between, but we eventually made it safe and sound! We finally got to see the ocean we had travelled so far for. It was amazing turquoise blue water, warm and tropical. Nothing like our rivers we go rafting on at home- the water was incredibly calm and serene.

Our first couple nights in Southern Thailand, we spent in Ao Nang. We rented a little bungalow on the beach and figured out very quickly that we’d need to get a motor bike rented if we were going to see the island. Luckily the bungalows had one that we could rent, so the first morning we set off into town to find some food, we came upon the famous banana pancake, maybe more suited for desert, but amazingly tasty none the less. The Thai pancake is a very thin dough with some sort of filling that is fried to a crisp and wrapped up, we tried everything from bananas to mango to ham and cheese, they were quick convenient and portable: like much of the food in Thailand. From there we explored as much of Ao Nang as we could, we loved our motor bike and couldn’t have done as much as we did without it. After a couple of days in Ao Nang, we boarded the ferry and headed out for our next destination: Koh Lanta. When we arrived in Koh Lanta we fell in love with the laid back markets, people and restaurants. More on Koh Lanta to follow next week.